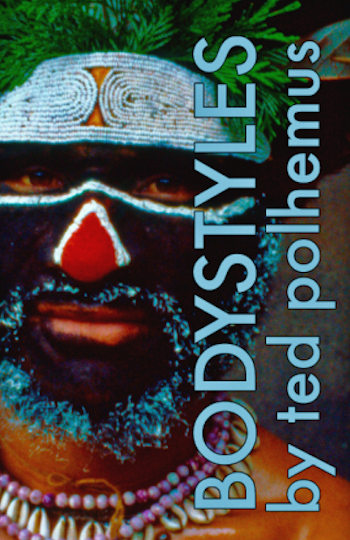 A remarkable social and cultural inversion has occurred in the last fifty years: where once culture was the monopoly of the upper classes, it now, more often than not, bubbles up from those on the ‘wrong side of the tracks’. This transformation has been especially evident in the world of style - with the authenticity of streetstyle challenging and then toppling the dictatorship of High Fashion.

Some Quotes From Streetstyle by Ted Polhemus

‘The street is both the stage upon which the drama of contemporary life unfolds and the bottom line metaphor for all that is presumed to be real and happening in our world today. In the past, ‘Western culture’ was most at ease and most recognisable within grand interiors. Today, as high culture has given way to popular culture, it is the litmus test of ‘street credibility’ that is crucial. If it won’t cut it on the corner, forget it.’

‘Hanging out, is best done in the company of those from the wrong side of the tracks. Some low life is essential. That, and youth: juvenile delinquents. In this sense, the street is a dead end - the place to go when you aren’t old enough or rich enough to get in somewhere. But while practical necessity may make the street a last resort for some, it is precisely this quality which makes it so seductive for many who could be elsewhere.

‘Like holy relics, street style garments radiate the power of their associations. Every age uses dress and body decoration to signal what is most important at that historical moment. Throughout most of our history that message has been ‘I am rich’ or ‘I am powerful.’ If today more and more people use their appearance style to assert: ‘I am authentic’ it is simply evidence of our hunger for a genuine article in an age which seems to so many to be one of simulation and hype.’

‘Styles which start life on the street corner have a way of ending up on the backs of top models on the world’s most prestigious fashion catwalks. This shouldn’t surprise us because the authenticity which streetstyle is deemed to represent is a precious commodity. Everyone wants a piece of it.

But it is more than the price tag which distinguishes the genuine article from its chic reinterpretation. It’ s a question of context. And when fashion sticks its metaphorical gilt frame around a leather motorbike jacket, a Hippy kaftan, a pair of trainers, or a Ragga girl’s batty-riders, it transforms an emblem of subcultural identity into something which anyone with enough money can acquire and wear with pride.’

‘There are two basic moves in streetstyle: Dressing Up and Dressing Down. The predominantly middle-class Beatniks and Hippies illustrate the later tendency - using dress to make a symbolic descent of the socio-economic ladder in the interest of authenticity. The Zooties (or, today, many of the styles associated with Rap) illustrate the former. The zoot suit, with its extravagant use of expensive fabric and its luxurious accessories, loudly proclaimed the message: ‘I’ve got it made’. This message has an obvious attraction to the underprivileged. On the other hand, Dressing Down - historically, an unusual phenomenon - is only to be found in the midst of affluence.’

‘In the 21st century more and more of us refuse to accept the conformity either of ‘this year’s look’ or the conformity of a particular subcultural style. Instead we have Do-it-yourself confidence and creative, throw-away-the-rule-book sampling & mixing to produce a unique personal style ‘statement’ which functions as a visual advertisement of who we are and where we are ‘at’. Never before in human history has there been so much freedom of choice in matters of style and never before in human history have individuals had such power and confidence in deciding their own appearance. And this for the many rather than the few.

For a long time it has looked sadly inevitable that fashion, marketing and the media would, like vultures, strip streetstyle bare to its bones - strip it of all meaning, significance and authenticity. And in a sense this is exactly what has happened: ‘ The Real Thing’ once reduced to a marketable, ersatz catwalk copy inevitably became a pale shadow of its former self. The more streetstyle came within the fashion industry’s ‘cool hunter’ site range the greater the likelihood that it would become an endangered species. Yes, yet, strangely, it could and should also be said that in the very midst of this devastation streetstyle went and devoured the opposition whole, in one bite, for breakfast. For, verily, fashion’s centuries old dictatorship (which not that long ago decreed the precise length of hemlines, width of shoulder pads and what colours should never, ever be worn together) has been overthrown. Rather than ‘fashion victims’, the vast majority of us - when it comes to our sampling & mixing our own, unique appearance styles - are a bunch of Punks thrusting two fingers up at the looming spectre of The Next Big Thing. Like Sid Vicious strangling the Frank Sinatra classic, we’re all now determined to do it ‘My Way’.